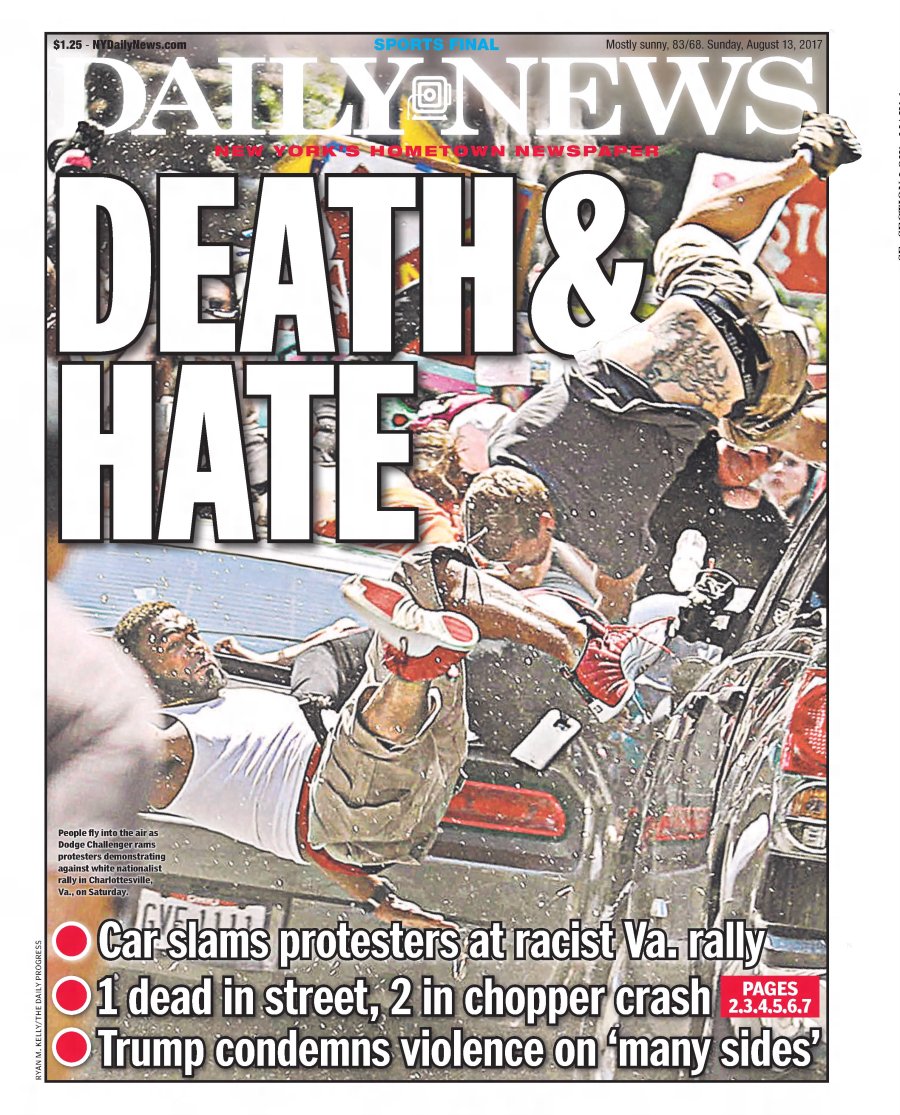 This is Trump’s America

This is Trump’s America: 80 years after Hitler, simmering hate erupts, by Mike Lupica

“The pictures out of Charlottesville this weekend are like black and white pictures out of the past, from German American Bund rallies, at Madison Square Garden in the 1930s… There were much clearer images out of Charlottesville this weekend than we once got in this city in the ’30s, with more modern video. The torches the white nationalists carried on Friday night helped tremendously with the visibility, in much the same way you get a better look at cockroaches on a kitchen floor when somebody turns on a light…

Go back and read about the rallies at the Garden in the late 1930s, organized by a tinhorn former Bavarian soldier named Fritz Julius Kuhn. Go back and look at the pictures. In February of 1939, there were 22,000 at the old Garden for the largest rally the Bund had ever held in this country. There was a huge portrait of George Washington in the middle of it all that night, and swastikas, and American flags. There was just no state of emergency like the one declared in Charlottesville, Va., on an August weekend before the start of classes at the University of Virginia.

What happened in Charlottesville isn’t merely about angry white people in our country at this time, or scared white people. This was about a growing army of mean racists coming into the light with impunity, using the First Amendment as a shield. Or just swinging it like the baseball bats and clubs you saw on the streets of Charlottesville on Saturday afternoon…

The chuckleheads in Charlottesville aren’t soldiers of free speech, or American values, or the preservation of their white history, whatever that even means. They are lousy domestic terrorists. They aren’t trying to ‘unite the right.’ They are slow-thinking and disenfranchised whites looking for a cause with almost flop-sweat desperation, punks with torches, famous now in the easiest possible way in America. For being stupid.

The America of Trump’s Father

The America of Trump’s Father: an Aspirational Fascism Reigned in New York, by Wayne Madsen

“One might have been confused about America’s actual loyalties during the brewing years of World War II if they happened to live in the greater New York City region. New York and its suburbs in Long Island and New Jersey had a vibrant community of first- and second-generation German Americans, the latter having included Fred Trump, Sr., a rising star in real estate and retailing.

Also active in the New York-New Jersey region was the German American Bund or ‘Amerikadeutscher Bund,’ an organization that supported Adolf Hitler’s Nazi Party and the goals and aspirations of the ‘New Germany.’ The Bund had been created in May 1933 on the orders of German Deputy Führer Rudolf Hess. The first Bund leader was German immigrant Heinrich ‘Heinz’ Spanknöbel, who initially called his group the ‘Friends of New Germany.’ In fact, the ‘Bund’ was nothing more than an overseas extension of the German Nazi Party and it took its orders directly from Berlin.

The Bund only accepted as members Americans of German descent. In 1936, the Friends of New Germany morphed into the German American Bund in Buffalo, New York. The group’s leader or Bundesführer was Fritz Julius Kuhn, a German immigrant and Nazi Party member, who received US citizenship in 1934. The general belief is that Kuhn was one of many Nazi members dispatched abroad in the 1930s by the nascent German Nazi Party to act as Nazi ‘eyes and ears’ in the United States, Canada, and other countries. These recent immigrants, who would become Bund leaders across America, were later involved in espionage for the German Gestapo and military intelligence Abwehr before and during World War II.

The Bund established its national headquarters at 178 East 85th Street in the heavily German neighborhood of Yorkville in Manhattan. It mirrored the Hitler Youth in Germany by establishing several Nazi youth camps, most notably Camp Nordland, Camp Will and Might, Camp Bergwald in New Jersey, Camp Siegfried in Sussex County on Long Island in New York, and Camp Highland in upstate New York, outside of the town of Windham.

The height of the Bund’s activities was a February 20, 1939 rally at New York City’s Madison Square Garden. It drew some 20,000 Bund members and Nazi supporters. One German American who did not hide his far-right views was Fred Trump, Sr., the father of Donald Trump. On May 31, 1927, Fred Trump was arrested by police while participating in a Ku Klux Klan march in his home borough of Queens in New York. The elder Trump was publicly known to be a racist and he refused to rent his apartments in Queens and Brooklyn to African Americans. In 1927, there were few organizations for far-right extremists like Fred Trump to join. One was the KKK, which had its roots in the post-Civil War Reconstruction South. Another was Italian leader Benito Mussolini’s overseas ‘Fascisti,’ which was primarily composed of Italian immigrants to the United States. By the early 1930s, far-right wingers in the American North were fast to embrace the Nazis and Kuhn’s Bund was able and ready to answer the call and begin recruiting to its ranks. Fred Trump’s FBI file – which includes the 1927 arrest at the KKK march – appears to be missing his pre-war and immediate post-war year activities. The file does not resume until the 1960s, when the FBI began monitoring the elder Trump’s association with Mafia syndicates in New York.

It is known that ‘Old Man Trump,’ the appellation given him by folk singer Woody Guthrie in a 1950 song by the same title, continued his racist ways after the war. Guthrie, who had the misfortune of renting a unit in the Trump-owned Beach Haven Apartments in Brooklyn, penned the following lyric: ‘Beach Haven is Trump’s Tower. Where no black folks come to roam. No, no, Old Man Trump! Old Beach Haven ain’t my home!’ It is also interesting that after the war, Trump insisted that he was of Swedish descent. In fact, Old Man Trump’s father, Frederick Trump, was an immigrant from Kallstadt, Bavaria. It was famed aviator Charles Lindbergh, a Nazi sympathizer, who stressed his Swedish descent to defend against charges that he was a supporter of Hitler. However, in both cases – Old Man Trump and Lindbergh – there was no question of their sympathies to the racial policies of Hitler and the ‘New Germany.’

Old Man Trump’s home and businesses sat in the midst of Bund activities and businesses that supported the Bund. One of the most popular newspapers among the German American community in New York and New Jersey was the Bund’s ‘The Free American and Deutscher Weckruf,’ published from 1935 to 1941 in both English and German.

The newspaper served to rally the Nazi cause in New York and New Jersey. The paper advertised New York theaters like the Tobis, 86th Casino, 79th Street, and Bijou that screened propaganda films fresh from the studios of Nazi filmmaker Leni Riefenstahl. Nazi Germany’s cultural inundation of the United States was a personal project of Propaganda Minister Joseph Goebbels.

In 1933, Trump opened the Trump Super Market in Queens at the corner of 78th Street and Jamaica Avenue. Since it was the first store of its type in Queens, it was an immediate success. Considering Old Man Trump’s political viewpoints, it is very likely that he purchased wholesale products, including meats from Bund butchers and German baked goods from Bund bakers, of which there were several in New York City for his store. Several German American-owned area businesses, including Maier’s Pork Store and Ehmer’s Pork Store, both on ‘Dritte Avenue’ (Third Avenue) in Manhattan, and dairies like Karsten’s Milch of The Bronx and Astoria in Queens and Erb’s German Sweet Shop in Manhattan, kept the advertising-dependent ‘The Free American and Deutscher Weckruf’ flush with ad revenue. Even large corporations like Philco, a manufacturer of radios, Texaco, Olympia Typewriter, and Simmons Mattress Company advertised in the Nazi newspaper. Nazi propaganda in German was broadcast on Tuesdays, Thursdays, and Saturdays from the studios of WBNX, first located in The Bronx and then moved to New Jersey.

Old Man Trump rented thousands of his apartment units in Jamaica Estates in Queens and Brooklyn to white Americans only. Bund supporters cheered Hitler for refusing to shake the hand of black American Olympian Jesse Owens after he won four gold medals in the 1936 Berlin Olympics. Considering Old Man Trump’s previous membership in the KKK, he was undoubtedly cheering Hitler’s snub of Owens, along with the Bund in New York. Old Man Trump also suspiciously volunteered, after dodging the World War II draft, to construct Navy barracks and garden apartments in at least three highly sensitive Navy ports in Chester, Pennsylvania; and Norfolk and Newport News, Virginia. All three ports saw thousands of American and Canadian troops embarked for combat in North Africa and Europe. Some of these troop ships fell prey to German U-boats, which received intelligence on the Allied ship movements from Nazi agents in the very same port areas where Old Man Trump so ‘generously’ bid on construction contracts with the Navy.

Today, Donald Trump, who has championed concentration camps for asylum seekers and homeless people, torn babies from their parents, and praised neo-Nazi marchers in Virginia, echoes the political vitriol of his father’s era Bund. Today, Trump is fond of demonizing Hillary Clinton, Barack Obama, and Joe Biden. In Trump’s father’s era such venom was directed by the Bund against New York Mayor Fiorello La Guardia, the late President Woodrow Wilson, President Franklin D. Roosevelt (who was sometimes referred to as ‘Frank Rosenfeld’)… all of whom were labeled as pro-Bolshevik ‘internationalists’…”
-Excerpt courtesy of New Zealand News, “The America of Trump’s Father: an Aspirational Fascism Reigned in New York,” by Wayne Madsen, October 2, 2019. Source: https://www.scoop.co.nz/stories/HL1910/S00036/the-america-of-trump-s-father.htm

The Mystery of Lawlessness

“I have sworn upon the altar of God eternal hostility against every form of tyranny over the mind of man.” — Thomas Jefferson

“When fascism comes to America, said Huey Long, it will be called by some other name. That wolf will come dressed as a sheep. All our fascists come disguised.

The pro-Hitler movement began as the ‘German-American Bund.’ That was the wolf in wolf’s clothing. It could get nowhere. It failed.

Hitler then put his agents, native Americans, to boring within such movements as ‘America First.’ Nazi fascism put on the garment of indigenous Americanism, of patriotism rampant.

The Christian is admonished: Be humble, be full of charity; love your neighbor as yourself.

The fascist is admonished: Be haughty; be hard; despise your neighbor as you love yourself. He is anti-Christian.

The anti-Christian fascist then takes on such names as ‘Christian Mobilizers.’ That is his disguise.

Traitors to America denouncing as traitors men who are loyal to America!

To detect this trickery one must see deeper than the outward appearance. The Germans did not see through Hitler’s trickery. Now look at them!

Fascism is a mental disease. Frustrated, impoverished, beaten, confused and desperate people were the easy prey for Hitler.

A healthy America can never be a fascist America.

We clean up the swamps where breed the mosquitos from which malaria and yellow fever come. We inoculate against smallpox and diphtheria. We are beating back with careful brain the plagues which imperil us. We begin to head off the river floods. Have we no wit to shrink the sources of the sufferings and confusions from which our American followers of our little Hitlers spring?”
-Except courtesy of Newspapers.com, The Dayton Daily News, January 28, 1945

-Images are courtesy of Newspapers.com